OER in other languages 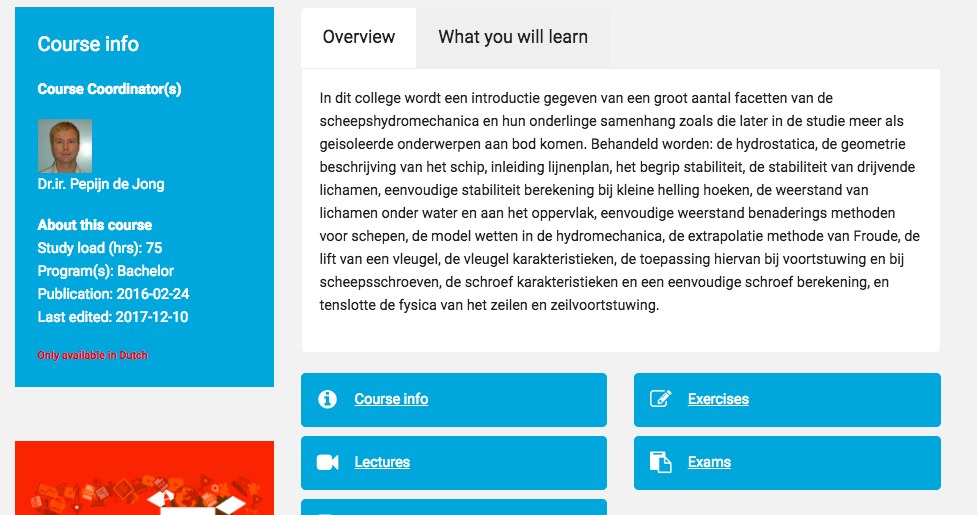 Ten years ago I worked at a polytechnic that had a campus dedicated to marine transportation.  I was surprised to learn that Canada, the second largest country in the world that also is surrounded by three large bodies of water, had only three post secondary marine programs in the country.  I also learned that certain regions of the world – Northern Europe, South Asia- were known for their knowledge in this discipline.  Therefore looking for discipline specific OER in other languages is an important consideration  because your chances of finding OER may increase if you search beyond English.

TU Delft has a really nice open course ware site with many resources in English and a few that are only available in Dutch.  Hydromechanics 1  is one of the three available open courses in Marine Techniques, all in Dutch.

In this lecture (sic, it’s actually a whole course)  an introduction is given to a large number of facets of ship hydromechanics and their mutual coherence as they are discussed later in the study as insulated subjects. To be treated: the hydrostatics, the geometry description of the ship, introduction lines, the concept of stability, the stability of floating bodies, simple stability calculation at small slope angles, the resistance of bodies under water and on the surface, simple resistance approach methods for ships, the model laws in hydromechanics, the extrapolation method of Froude, the lift of a wing, the wing characteristics, its application in propulsion and in ship propellers, the screw characteristics and a simple screw calculation, and finally the physics of sailing. and sailing propulsion.

And So It Was Written

This work by @tanbob is licensed under a Creative Commons CC-BY Attribution 4.0 International License.

A TRU Writer powered SPLOT: OER in other languages